Nope! Just kicking off the month long party for
An Error In Judgment

To celebrate, I've reduced the price on Levels of Deception to .99!

You can find it on Amazon, Smashwords, (where you can download the format of choice for the e-reader of choice), and as soon as the electronics grind it all out the e-book will be available all over the place for .99.

I LOVE celebrating the release of a new book! Mine or anyone else's. It's a new adventure waiting, an invitation to laugh, cry, gasp, shiver and love -- and it's a new friend who, once read, will wait patiently for you to return, or be satisfied with a cozy spot in your memory.

If you haven't had a look at Levels Of Deception yet, here's a brief synopsis -- I should probably warn you … the heat turns up between Thea and Paul. Like one reader mentioned, "it's nail-biting romantic drama" added to a mystery that twist, turns and ultimately surprises! 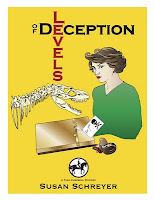 Levels of Deception
The second in the Thea Campbell Mystery Series

The murder of a professor in the basement of the Seattle's Burke Museum is haunting Thea, and not just because the man was her absent boy friend Paul's colleague. Both men have been implicated in the theft of valuable fossils from the museum and Paul not only refuses to discuss any of it with Thea, but warns her to butt out.

Unwilling to see him framed for crimes he didn't commit, Thea launches her own investigation. When an attempt on her life lands her in the hospital. Everyone, including Paul, insists she run to his protection at his dig site in Montana.

But what she finds there is far from a refuge.

The levels of deception are more personal and extend farther than she could have imagined.

The price of her pursuit of truth will be blood.

An Error in Judgment

The third in the Thea Campbell Mystery Series

Thea's initial plan to reestablish her friendship with Andrea, despite the arrogant man she married, grows into resolve to support her through the crisis. But Andrea needs more than support when her husband's death is deemed murder and she is arrested.

With boyfriend Paul Hudson's help, Thea's digs in to investigate only to discover complications far worse than either had anticipated. Andrea is pregnant and in fragile health, warring business partners jockey for control, slighted family members turn ruthless, and Thea and Paul become pawns in a desperate struggle for money and power. But, the situation, already critical, takes an even more personal twist with the arrival of an old nemesis -- a man capable of orchestrating not only Sig's death but the grave danger stalking Andrea, Thea and Paul.

Posted by Susan Schreyer at 7:59 AM