Covers are important--even for e-books. It's worth knowing the kind of cover you want for your book because it tells the reader quite a lot about what they can expect. Different genres have different "looks." A book that is light and comedic will not have a cover that looks like it belongs on something dark and sinister. Often times there will be clues to the story incorporated into the artwork. It may even be metaphorical.
I know all this--have known all this and yet…I had no idea what the cover for Death By A Dark Horse should look like. I scoured the website that have downloadable photography. Beautiful photographs and art work, but nothing that looked like my book. I asked my friends and the only thing people could agree on was the presence of a horse.
Well, yeah. I got that part. Then I remembered an email conversation I'd had months earlier with fellow Sisters in Crime Guppy Chapter member Tracy Hayes. She is not only a writer, but an artist and a horse person. I dropped her a note to see if she'd be interested in working on a cover for me and within minutes I was sending her a copy of my manuscript. She finished the book quickly and in no time we were burning up cyberspace with discussions and ideas. She sent me her initial sketch, I took a look and was amazed.
She absolutely nailed the character of Thea, all the way down to the determined jaw line. Blackie was just right, too. In fact, he looked a lot like a cross between my Eddie, and one of my student's horses. 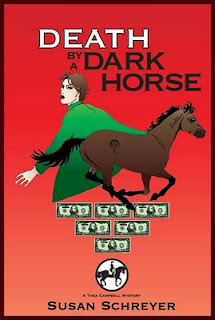 Then we played with color. Believe me, I made some really icky suggestions, as it turned out. But Tracy was game, and we had some good laughs over some of the combinations. What we ended up with was eye-catching, portrayed Thea and Blackie well, and is metaphorical. The cover encompasses a great deal of meaning--much of which will be understood when the reader finishes the story.  As an added touch she included a logo--the dressage horse and rider in the circle at the bottom of the cover. It will appear on every book in the series and will be easily recognizable as part of the brand.
A lot went right when I made the decision to contact Tracy. There's no way I could have done this on my own.
Death By A Dark Horse will launch on November 15, 2010 on Amazon as an e-book. It will be available shortly afterwards on Smashwords and those retailers using their catalog. "Buy" buttons will be on both my blogs and website. I loved writing it. If you have half that fun reading it, you'll have a ball!
Posted by Susan Schreyer at 8:14 AM