The countdown has begun!
Death By A Dark Horse
will be available on November 15 from Amazon and Smashwords. 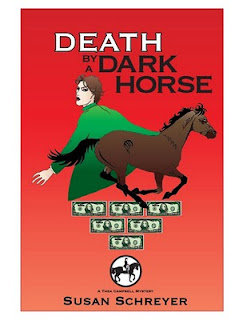 Thea Campbell goes out for revenge when the one person who is simultaneously the most likely and least likely candidate for thief steals her horse. But Olympic hopeful Valerie Parsons is past caring about being arrested. She’s dead. At first Thea’s horse is assumed to have killed the woman, but when the coroner determines it was a human hand and not a horse’s hoof that ended Valerie’s life Thea becomes a person of interest. Now intimidating people with little regard for due process are showing up on her doorstep looking to even the score. Toss in her wrecked love life, a sexy geology professor who stirs up more than dust, and an alleged psychic horse, and it soon becomes apparent that Thea’s predictable life is now out of control. As she takes charge of clearing herself of the murder she discovers the victim had a knack for making enemies—one of whom is Thea’s ditsy sister. She pursues her investigation with more at stake than ever, and in a seedy biker bar comes face-to-tattoo with information that will lead the police to the real killer. She dutifully reports to the detective in charge. But Thea is wrong. As close to dead wrong as she ever wishes to get.
Posted by Susan Schreyer at 9:51 AM