Yay!! The second Thea Campbell mystery, Levels Of Deception, will be coming soon! Expect it to see it available in e-format and print toward the end of February! In this adventure Thea must step out of her familiar world of dressage and Snohomish, Washington, and into Paul's world of paleontology in the hills of Montana. 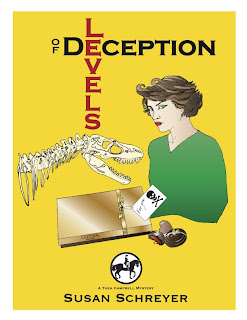 Thea isn't supposed to obsess about a murder in the basement of Seattle's Burke Museum, even though the victim was her absent boyfriend Paul's colleague -- even though her gut screams at her to pay attention. So when the police connect Paul to thefts at the museum and the murder, despite his being two states away on a dig, Thea secretly launches her own investigation to clear him. Paul's stubborn refusal to give her any information doesn't slow her down, but an attempt on her life does. Coerced into running to Paul's paleontology dig in Montana for safety, what she finds there is far from a refuge. The levels of deception are more personal and extend farther than she could have imagined. The price of her pursuit of truth will be blood.
And just a reminder -- Don't forget the Blog Tour de Force. And especially don't forget to drop by here on Saturday when it's my turn! Looking forward to seeing you all there!
Posted by Susan Schreyer at 1:49 PM